Skip to content
Last Saturday, I had another Julia Child meltdown.
What is that exactly? Well, it’s my nicer way of describing myself angry over something and bringing out my frustrations in the kitchen. Remember the scene in the movie Julie & Julia where a furious young Julia C was chopping tons of onions in her kitchen?
Anyway,  I was up early last Saturday to try the zucchini bread recipe from a very beautiful cookbook I borrowed from the library.  Oh you should see all the pictures — artfully taken, food looks so healthy and appetizing.  Not to mention, the recipes in that book were supposed to be served at a high end spa.

Since there are very limited recipes on baked goods that are gluten, egg, dairy and soy free and the book was made by experienced Chefs, I decided to go for it.    Doubts slowly built up, right from the minute I measured the flours the recipe required.

As I meticulously follow each step, my gut kept on telling me that there is something wrong.  First, the flour combination contains a big percentage of soft flours or binders that can make the end product gummy.  Then, the batter was too watery.  Lastly, after the 55 minute baking time, the middle is still liquid after the toothpick test was made.

Since I’ve already spent a great deal of time and precious ingredients, I kept on praying that the product will be something worthwhile. Though a big part of me wants to dump the baked “bread” asap, I still gathered some more faith and waited for it to cool down.  Then the big reveal. 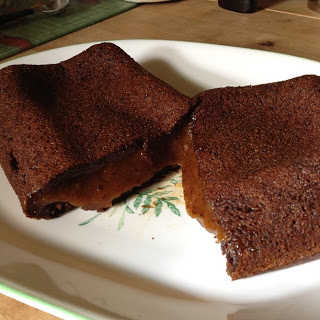 If the sight of what supposed to be bread isn’t enough to give you a meltdown not to mention the time, ingredients and dish washing involved, how about looking at the faces of 4 young children who patiently waited for breakfast?  Since there’s no vegan bakery on call, I have to put aside what other plans I have that day and bake again.  This time, the time tested Apple Cinnamon Cupcakes came to the rescue.

I rarely frost the cupcakes I serve my kids. For this occasion, I went all out.  Of course, this didn’t disappoint.

1. Preheat oven to 350 degrees F and prepare cupcake pans by lightly greasing with oil or use cupcake liners.
2. Prepare flax goo by combining flax meal and water.  Set aside for 5 minutes before using.
3. In a small bowl, combine the flours, baking powder, baking soda, salt, cinnamon, and nutmeg.  Mix thoroughly.
4. With an electric mixer, blend the flax goo, sugar and oil until light in color.  About 2 minutes.
5. Slowly add the dry ingredients and mix until just combined.
6. Fold in the apples in the batter and spoon into the cupcake pan.  About 2/3 full.
7. Bake for 18 to 22 minutes or until a toothpick inserted in the middle of the cupcake comes out clean. After you took it out of the oven, let the cupcakes stay in the pan for 2 minutes before transferring on a wire rack.  Cool before frosting.

Frosting
1. With an electric mixer, cream the butter and slowly add the powder sugar. About one cup at a time and scrape the sides of the bowl before each addition.
2. Add the ground cinnamon, salt and 3 Tbs milk.  Mix on high until light and fluffy. About 3-4 minutes. If the frosting is a little thick, add the remaining 1 Tbs of milk.
3. Use the icing as soon as possible because it will harden a bit.  This frosting is great when used with icing tips because it will hold it’s shape.

* After you frost the cupcakes, finish it off with grated cinnamon and nutmeg on top. 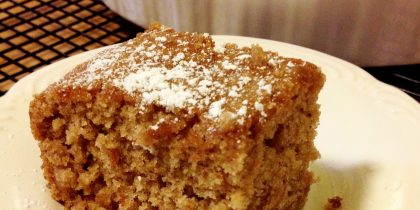 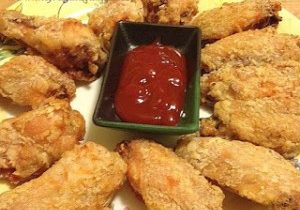