It’s the second week of the Simple Healthy Changes series here on the blog.

No, I’m not showing you how much weight I lost already. Why? Because this series isn’t meant to be a drastic, easy fix for losing the pounds remember? Plus, I actually do not expect to lose over 1-2 pounds (hello water weight).

So, what’s the good news then? Well, I’m happy to report that since I decided to commit on this journey, I became very conscious of my food choices and became sensitive on my body says after I ate a specific type of food.

Here’s a quick update of what happened last week:

1. For two days, instead of having my daily rice and meat breakfast, I had the Blueberry Smoothie for breakfast.

I have to admit, this little change had make a big difference on how I felt. I was surprised how filling the smoothie is. It did the job of making me feel full for 4 hours just like my normal breakfast. However, I didn’t feel bloated or sluggish. My tummy actually felt lighter.

2. I went bowling with my friends.

I confess, I have been really bad on the exercise department since July last summer. The most exercise I did for the past six months is nothing more than a walk from the house to where my car was parked. Yup! I know it’s really bad. However, it’s not too late to start again right?

For this week, I’m tackling my waterloo which is dessert. Yes, I have a big sweet tooth and I do have dessert to end almost every meal.  Since I just cut this habit without feeling unsatisfied or deprived, I made an alternative that is way healthier and has fewer calories.

This basic recipe which my kids can’t get enough (we always have a jar in the fridge), is not only a good healthy snack but an excellent dessert base well. By adding fresh or frozen fruits, shredded coconut or chocolate chips, it transforms to a fancy dessert without the guilty calories.

In a clean 2 cup mason jar, combine the chia seeds, cinnamon and sweetener.

Slowly fill the jar with the non dairy milk.

Using a fork, whisk the mixture until it is well incorporated. Make sure that there are no big lumps of chia seeds.

Put on the lid and store in the refrigerator for at least 24 hours.

Shake the jar before serving. 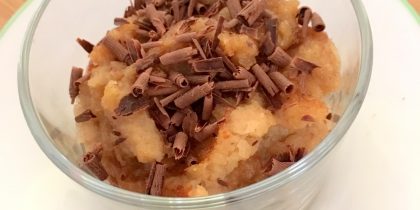